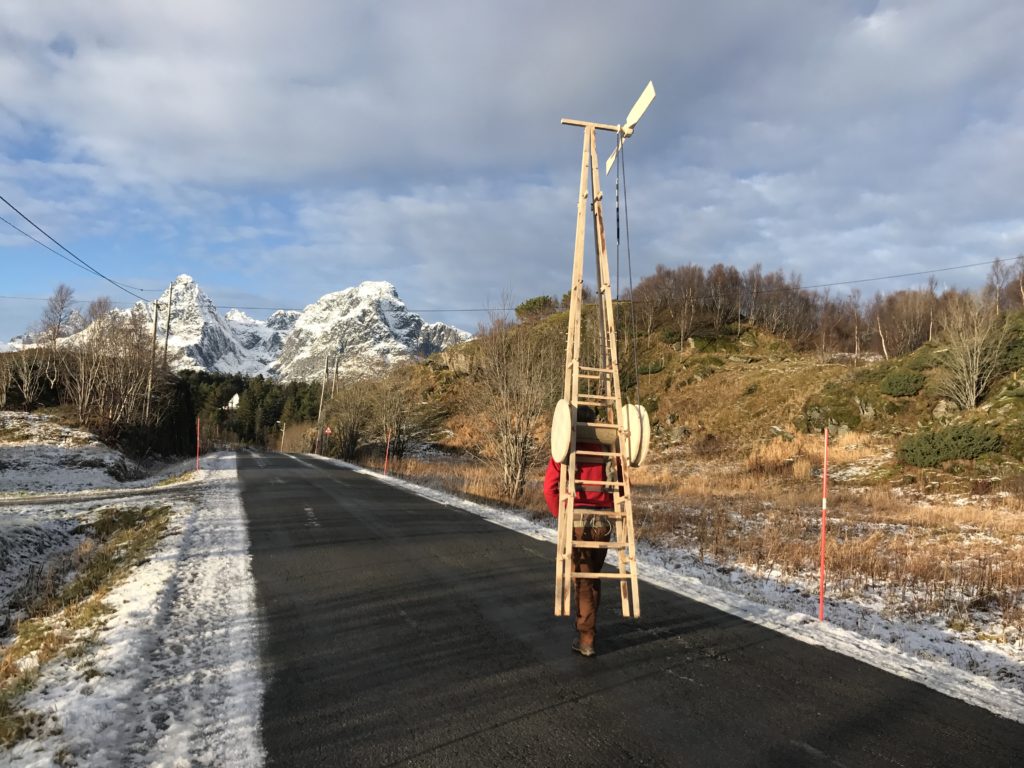 A village in the far Eastern region of Lofoten, on the southern part of the island of Hinnøya. In 2013 the local salmon farming industry was sold, which resulted in a loss of jobs. This fragile community, with its about 140 inhabitants, still has a local school, kindergarten and grocery store. A new seaweed farming start up aims to bring prosperity back to the area. Tourism is not as present in Digermulen as in other parts of Lofoten, but in many respects, this is where cruise tourism in Northern Norway started. The German emperor Wilhelm II made a voyage there in 1889, inspired by his fascination with mesmerizing imagery in landscape paintings from the area.

Residencies between October 2018 and September 2019. During the initial residency in October, Futurefarmers built the prototype for a portable windmill (backpack), involving the local school children in the process. During the summer of 2019 they constructed a larger windmill, running a printing press.

Upon invitation to Lofoten by the LIAF curatorial team, Futurefarmers were warned of the ever-present winds that move up and across the archipelago of Lofoten. Futurefarmers Amy Franceschini and Lode Vranken built a small, wearable windmill to encounter these winds for their first visit. This object serves as a muse, a conversation piece and a mode of imagining a larger, mobile mill that could be used by several people for various purposes, like running a printing press.

The Futurefarmers’ project in Digermulen is envisaged as a collective, situational, site- responsive processual work determined by the particular circumstance and environment of the Eastern region of Lofoten. The principles of the work will involve an enquiry-based approach to art-making that will span multiple disciplines and make use of the unique resources available, exploring themes of communication, collective memory, and resilient behaviour.

Futurefarmers is an international constellation of artists, activists, researchers, farmers and architects who work together to propose alternatives to the social, political and environmental organisation of space. Founded in 1995, Futurefarmers use various media to deconstruct systems, to visualise and understand their intrinsic logics, and to offer more sustainable alternatives. These include food systems, public transportation, and education. Amy Franceschini is the founder of Futurefarmers. She received her BFA from San Francisco State University in Photography and her MFA from Stanford University. Lode Vranken received his master’s in a UN Course on Human Settlements and Architectural Philosophy from the KU Leuven, Belgium.